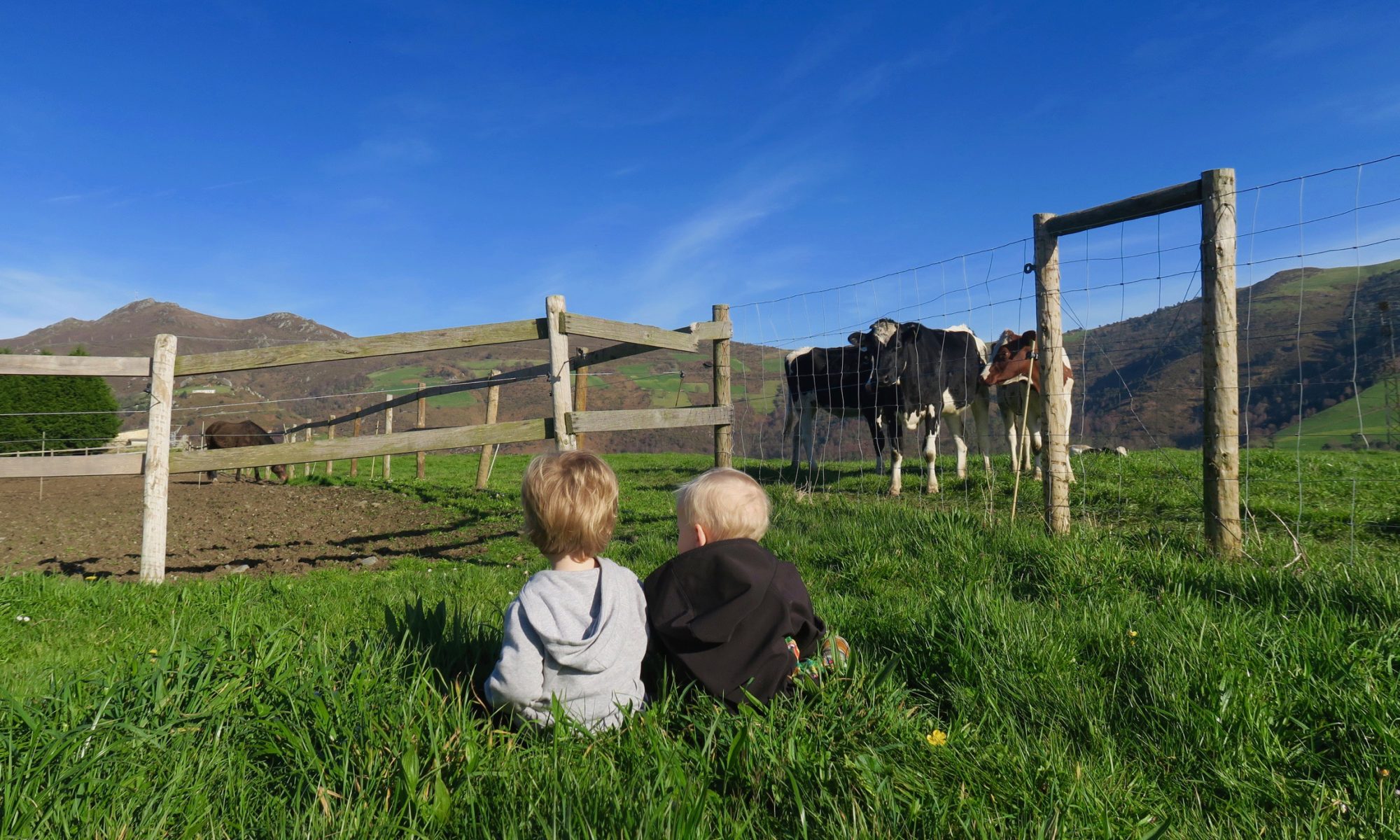 Climbing the ever steepening terrain, the car dropping down through gears, views inversely rising: pretty to impressive, ending at stupendous. Glimpses of a landscape flashing through trees as the car switches back and forth; hairpin after hairpin.

“I can smell aminal poo,” the three year old exclaimed with rising excitement. “Mummy, I can smell aminal poo!” And so we all took deeply, theatrical breaths. And then I could smell it too and we could all smell it and the car was then full of joy and of children exclaiming happy things. And we were all wondering out loud which aminal might have done the poo and which we would see first, aminal or poo.

And the infant was very excited too and he was repeating my parent name and my wife’s parent name like a mantra, rat-a-tat-tat at high velocity. And I was watching him in the rear view mirror and saying his own name back to him and trying to wave at him with the kind of wave he uses, but he didn’t notice me.

And the sunlight was streaming through the car windows and also through the trees that lined the single track road, which at the side, my side – the side with no barrier – fell away down a steep and rocky slope that ended only all the way at the bottom, far below.

And then we swung off that road and onto a roughened concrete track that led up a steep hill and which was sandwiched between grassy embankments, and only then was I able to finally undig my fingernails from the faux leather handle of the car door and breathe a clandestine sigh of enormous relief, because of course, my wife was the one who had been driving the car.

But then we had to stop because our way forward was blocked, and in the most fantastic way imaginable. Indeed, Father Christmas himself, sitting atop a present laden sleigh and attended by a sextet of jangling reindeer, would no more have been better received than this obstruction that we now faced.

It was a blue tractor and when he beheld it, the three year old giggled in an involuntary manner delightful enough to melt the heart of any staunch non-fans of tractors or of laughing children that may have happened to be in the vicinity. I myself was most impressed when, instead of bullying us back the way we had come, the tractor driver friendlily waved us on and himself pulled off the road to allow us to pass. Unbeknown to us at that time, two days hence would see the three year old steering that very tractor as I folded myself into the door space and held on through the effort of head and shoulder pressure alone. Bouncing along I would try my best to forget the disturbing details of the tractor-trailer-accidental-mortality incident featured in the farm safety information film that aged ten, we had been forced to watch at our London primary school.

Well, as we passed that tractor, subsequently polishing the sump of our car on the varied peaks of high altitude speed bumps, we began to really see real live aminals such as horses and cows and sheepdogs and geese and goats. Goats ffs! And one of them was so small and so cute and we saw it drinking on-trend goat’s milk from its mother’s udders just like our infant does from his mother’s (not goat milk) and we also saw the assumed father: a billy sporting a suave goatee beard and grumpily keeping himself apart from the rest of the group, until presumably such time as he is required to inseminate another nanny, thus maintaining his genetic hold on this far flung hilltop kingdom.

And then it was time for lunch and we headed in and sat at the table hungrily fiddling with our cutlery and our napkins and when lunch came it was a deep tureen of soup, and rustic bread cut as big as megaliths and we dipped the bread in our soup and swallowed it down. And then the second course came and we devoured that too and washed it down with glugs of cold red wine. And there we sat, filled to our brims and waiting for our ice cream torte (Viennetta) and coffee and we planned the rest of our day: which would almost entirely entail walking to the top of the lane and looking at the aminals.

Afterwards, and having sensibly pulled wellies onto our feet, we struck out, covering whole metres at a stride and before no more than seven or eight of these metres had fallen by the wayside, I nearly tripped over the three year old who was nipping and darting underneath my feet and reaching up to me with both of his short arms.
“Daddy, up” he pleaded and after a short and futile negotiation on my part, I did pick him up and I gave him a cuddle and we all walked over to meet the horses.

That evening, with the boys tucked up in beds and the electric baby monitor efficiently transmitting their every breath, we discovered one last aminal – as welcome as it was unexpected – perched fireside in the living room atop the woodpile, and smoothly rotating feathered head excepted, completely, perfectly still.

“I thought it was a plastic one,” my wife explained breathlessly when she came to grab me from wherever I had been.

Then, owl or no owl, the announcement came that dinner was served and we skipped along to the dining room to drink the rest of the bottle of red that we hadn’t finished at lunchtime, and to consume more than enough of the extremely hearty fare on offer to see us through til morning, at which point we would be returning – boys in tow – to the same spot, for freshly made churros, good coffee, hot chocolate and toast, and we would make a plan for the day that would involve eating and waterfalls and lots of aminals.

Where it all happened…