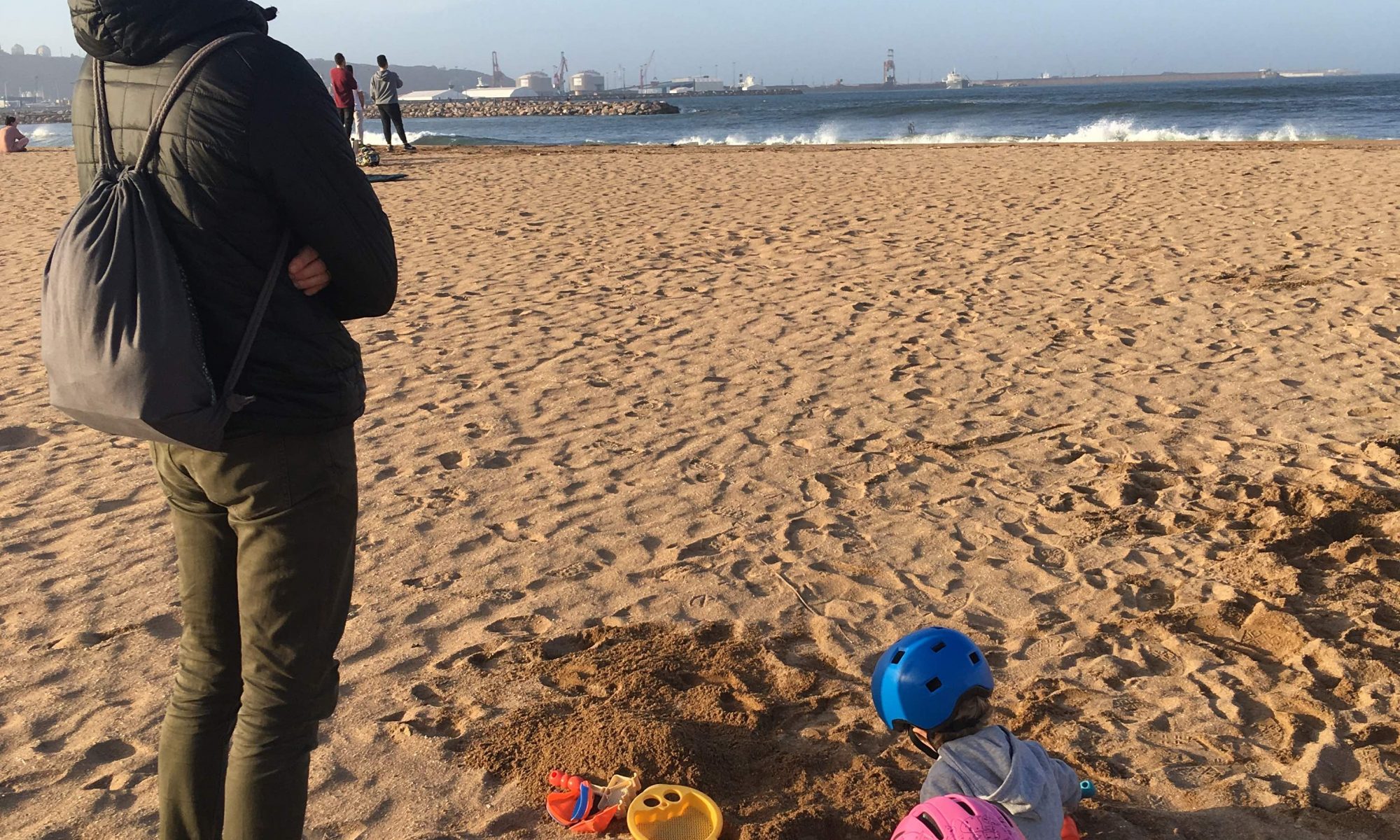 Outside our house at The Beach That Never Has Waves, the swell is filling in fast. The tide is already too high on the bank and the whole thing has become a lurching trampoline of a shore break. Ducking and diving under mutant waves, four or five waveriders are trying their luck. Each time a rideable one stands up, they take their turn to drop like a steel rod through air and water down to the sand beneath. Their bros stand high up on the berm in streetwear and trainers, cackling. Then a sneaky one catches them and they back-peddle madly through the sand, jostling to save their belongings from the encroaching foam.

A few hundred metres offshore, waves are stacking up on a reef off the headland. They look as if they will break with awesome perfection. But when the water deepens the waves fatten and pass by, leaving only a wobbling patch of white foam on the water. Thus undiminished, the sets next approach the harbour. Sections of them smash onto the back wall and up into the sky; the rest march on. There is a very large and green starboard buoy at the entrance to the harbour and the swell shows its meat again by exploding around the buoy. It was on this very spot, that last summer a British yacht became first grounded, and then grinded, before washing ashore, her hull skewered by her own mast. Apparently, the skipper had not been insured; and so it is.

A few swells ago here at The Beach That Never Has Waves, my visiting cousin, my sons and I were killing time. Waiting for the tide to come in – to see if it would be surfable or not. The toddler was digging, and the infant was ramming fistfuls of sand into his gob. And we all watched as sets bigger even than those today, capped on the reef off the headland. As, with a sandy finger I hooked sand from the oesophagus of my youngest, we noticed a sailing dinghy, a Laser we agreed, make her way out of the harbour entrance. She headed along the shipping channel, dwarfed by the mast-high waves beyond her, yet safe on this bearing. Then, at the very peak of the swell, the boat inexplicably turned right (tacked to starboard) and headed straight at the oncoming lines of doom. We on land could not fully comprehend what we were seeing, so there we remained, eyes glued to the scene. We fully expected (and perhaps secretly hoped) to witness either a spectacular rescue, or more probably a certain drowning. Apparently eager to entertain us, the dinghy rode up the face of the first wave of the set, crested the peak and disappeared safely behind it. The second wave, however, was much bigger than the first and it was this which broke across the dinghy and capsized her. We watched with considerable interest as the rest of the set poured through and mowed over the upturned dinghy.
“What the? Shall we? Should we…?” I stuttered. “The Lifeboat. Coastguard – you know?”
“Well, what’s the number?” asked my cousin. “But also, what about roaming charges?”
But then we stopped such chat because the set had finished out there and was now coming past the green buoy and on into the beach and detonating impressively on the still-exposed rocks. Meanwhile, far out there, the crippled dinghy lay on her side in the foam.

But then… And THEN! Up rose the mast and the sail with it and glory be! she was underway once more. My cousin and I shared the British equivalent of a euphoric high-five: a strongish look with eyebrows raised. My eldest son – who had missed the whole thing by looking at the wrong thing the whole time, as three year-olds are wont to do – and I shared a real high five, at my request.

But, with ample opportunity to now flee the scene in record time and return safely to her mooring, the dinghy instead lingered there in the white patch of water.

And then the horizon darkened as again more very large waves approached.
“There is just no helping some people,” I might have said, as the dinghy, having got herself safely over the first three waves in this new, million wave set, was once more ploughed sea bed-wards by the rest of them. When the set at last ended, the – still alive – skipper righted the dinghy again and then just continued at it, keeping up this remarkable endeavour for as long as our group stayed on the sand, eating it and digging in it.

And later, as we supped consistently good coffee, at the cost of a mere 1.30€ a cup, in a cafe behind the beach, we decided that he was probably still at it then too. Is stunt-dinghy-sailing a thing now? we mulled, as we dipped our complimentary little biscuits into the wobbling foam atop our financially satisfying beverages.