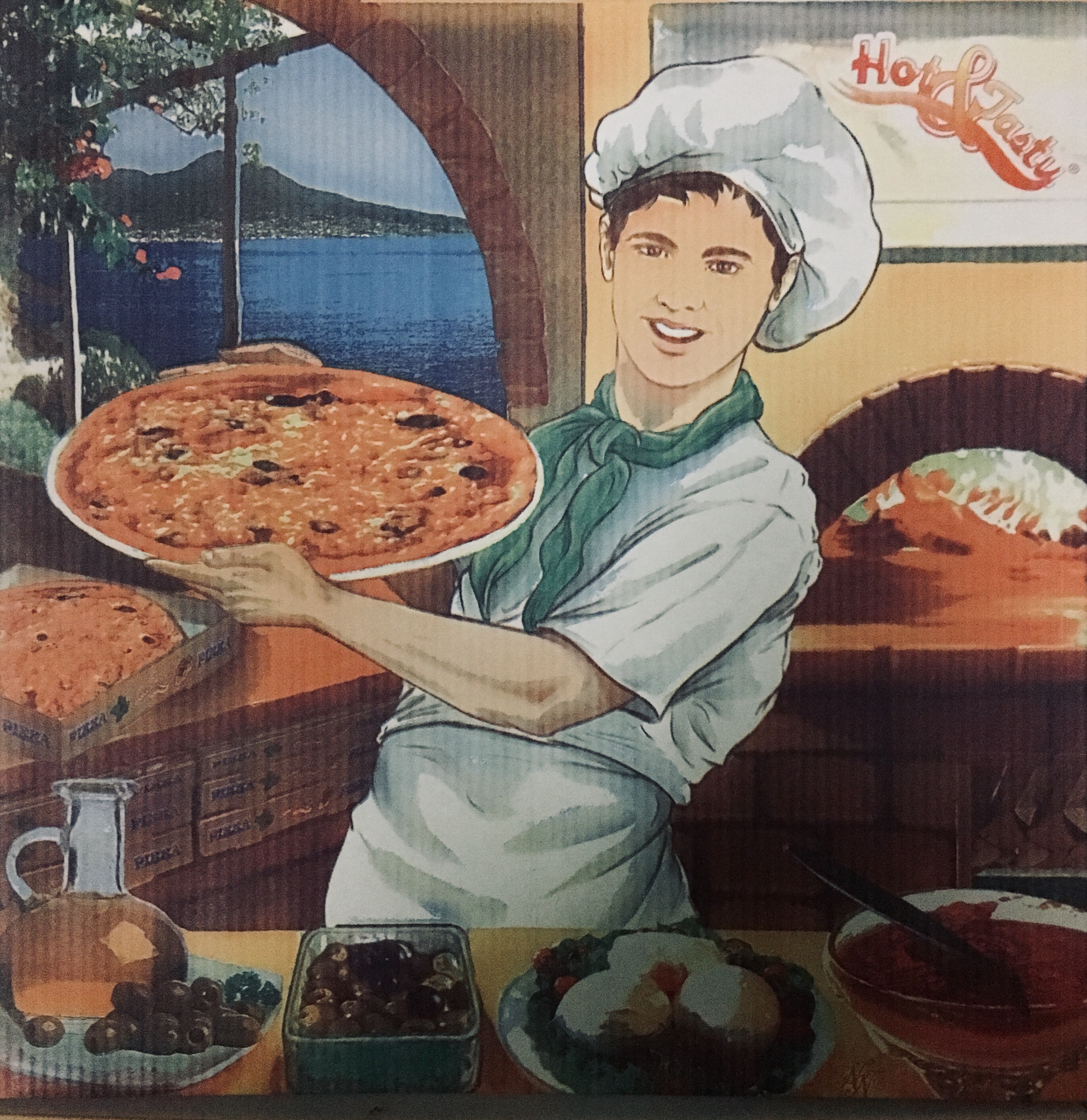 Today as we passed the local beach I was happy to see that the waves were complete shit and by this I mean they were so shit that even I – a crowd-hater of British surfing heritage who would rather surf complete slop aloneish than good waves with anyone else – wasn’t tempted. There was a cross-onshore north-easterly howling through the streets abutting the beach and it was bloody cold, especially by local standards. A lone kite surfer who seemed pretty good (I have no idea of course) was fiddling around in the spume at the edge of the water. Anyway, I was with the fam so I couldn’t have gone in even if it was pumpiño. Which it wasn’t.

We went for pizza and it was pretty good actually, almost entirely because the base was. As none of you may know, I am a closet pizza bore of such magnitude that I should really be cringing writing this now – yet I am not. In short, for me it is all about the base of the pizza, which must be made from proper dough and it must be cooked quickly in a fucking hot – preferably wood-fired – oven by someone who knows what they are doing. Just for the record, that someone is not me. Although I am very good at many things I have never been arsed to master the intricacies of ’00’ flour or 425°C wood-fired furnaces. No, I would much rather judge, edit and finally eat others’ works. The problem with pizza (here I go) is that any fool is able to take a fistful of the finest Italiano artisano ingredients and scatter them upon any old base and cook them in an oven and then claim to have created a gourmet pizza, even though they should know that they are lying and are also delusional (I will be interested to see if Brexit will put paid to the supply of said topping ingredients and subsequently to that sort of fool). In fact I’d rather eat a perfectly cooked pizza with nothing on it (yes, you read that right: NOthing) than eat a mediocre one with finest whatever on it. My wife claims to share my sentiments yet the amount of frozen pizzas she shoves down her neck strongly suggests that in fact, she does not [give a shit].

So yeah the pizza was good but what I wanted to say was that before lunch, my wife and I met just outside the restaurant, both of us with a sleeping boy in tow. She was pushing the two month old in our lovely new second hand pram and I had the two years and two months old in the YOYO. Well of course although we love them a bit we were licking our lips at the thought of a few minutes of childless pre-dinner afternoon Facebooking and boozing but unfortunately the temperature difference between the fore-mentioned cold and windy wind and the warm pizzeria meant that they both bloody woke up immediately which actually wasn’t too bad as they both only cried a bit and we love them a bit too remember. 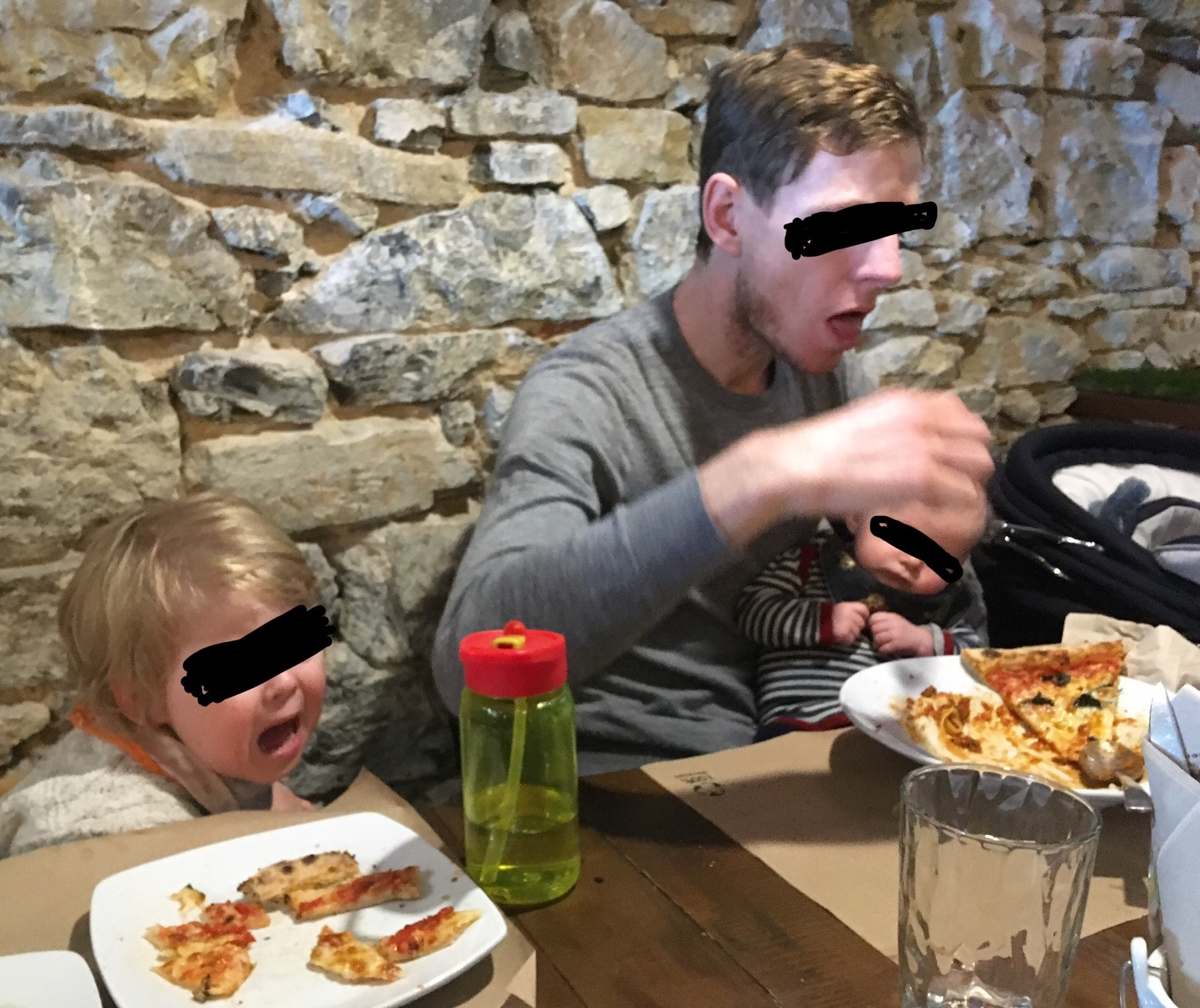 Later, during the meal and when the two year old had eaten enough to feel better thus enabling himself to recall and use words other than no, we all relaxed. M, however had other plans and began to sing his special “malcontent” song which usually means burporpooplease and which also meant that I, faceful of pizza, had to pick him up and sling him onto my shoulder whilst being careful not to grind his pretty little nose off on the on-trend bare stone wall lurking behind my chair. Patting his little back, I continued to stuff pizza into my mouth until the point when he really had had enough and still hadn’t burped so with a deft motion that demonstrated my mastery of baby care to the now attentive audience of all the other diners in the restaurant, I spun him a hundred and eighty degrees and straight into the left-hand-under-bum-right-hand-on-chest-baby-back-to-daddy-chest hold that my brother out-of-law (what else to call him? My sister’s partner, lover, boyfriend?!) showed me back when I was just a lowly uncle and able to do *whatever I wanted, whenever I wanted… But I digress (a lot). In this position, and with a squeeze ranging from gentle to quite firm, M will usually expel whatever air, milk or poo is causing his discomfort. This time however, not. Anyway, as he cried ever louder, I found myself regressing and I began to hush and shush him which as I previously discussed in another post, he doesn’t much care for. At M’s apex – and before he did in fact evacuate his stomach contents and bowels in synchronisation – he was so loud that had I shouted at the top of my voice I wouldn’t have been audible above his din.

People were staring now and worse, mylovely wife was looking back and forth between her pizza and I and giving memultiple “looks” and seemed to be threatening to take M from me and save the day; something I [probably] would not let happen (this time). Notbeing one to stress easily, I began to stress and I was interested to discover that my hushing was somehow evolving from a simple ‘Shhhhhhh,” to a version of a more fully formed sentence.
‘Shhhhhhhhuuuut,’ I said.
‘Shhhhhhhhuuuuuutttt,’ I said.
‘Shhhhhhhhhhhhuuuuutttt the,’ I said.
At this, my wife’s head jerked up from her pizza and she pointed her face toward me in a way that unsettled me a little.
What? my face spoke back to her. As if I was going to finish that sentence – of course I wasn’t! What kind of man do you think I am anyway? Please credit me with enough intelligence to know that there is no point telling a two month old baby to Shut The Fuck Up; and especially not in public.

Prologue
Clean bummed and wind free, M finished his afternoon in a calm and contented manner and best of all, when he was sure that no one was listening, he confided in me that he was in complete agreement with all my points – discussed above – relating to pizzas and more specifically, pizza bases.

*All great until Sunday afternoons roll around and all your mates bugger off with their other halves for snuggles and series watching and meals and you are left alone with an ageing packet of Lidl tortellini and a hangover. Sob sob sob etc. …